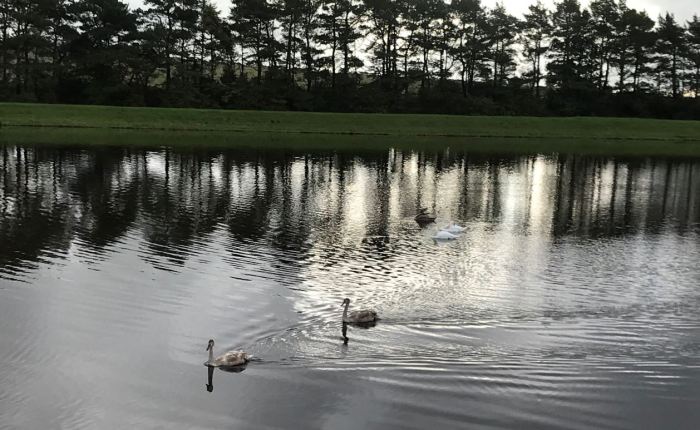 Among My Swan – still continuing an extremely tenuous avian theme.

When even the so-called “world’s most powerful man” (not for much longer if we’re lucky) isn’t safe from the Covid-19 pandemic, then who is?

Then again, most of us have changed our behaviour to try and mitigate the risk, both to ourselves, but even more importantly, to those we may come into contact with who are potentially more vulnerable. I would never rush to wish ill-health on anyone, but there’s a certain Karmic retribution at play whenever a Covid-denier and especially the world’s most powerful Covid-enabler, the Obfuscator-in-General himself, gets hoist by their own petard.

I have to admit, it also provided a few moments of real levity. Trump’s tweet about testing positive was met with an immediate response that this was probably the only positive thing he’d ever tweeted (twet? twatted?) – while it was noted that his test was probably the only one where he hadn’t felt compelled to cheat.

Someone else revealed they’d tested positively as wholly unsympathetic, while another reminded us an underlying symptom of Covid-19 was a complete lack of taste … and wondered what excuse Trump had for all the other blighted lifestyle choices he’d made before falling ill.

Anyway, back to more important stuff. Saturday, 3rd October, summer is officially over and the day is a complete washout.

It started raining late Friday night and hadn’t stopped and didn’t look like stopping anytime on Saturday. If there been a club run I would have been out sharing the misery, but there wasn’t. So I didn’t.

Sunday then, and there may have been water, water everywhere (nor any drop to drink) but there were patches of blue in the sky and a much better day beckoned for a little bikling.

Heading out for a jaunt up the Tyne Valley, I dropped toward Wylam to cross the river. It might have been a Sunday, not a Saturday, and I might have been arriving at an unusual time, but my timing was still impeccable synchronised to coincide with a long freight train of gravel-filled hopper cars, that trundled slowly by while I was caught at the level-crossing.

I crossed the river, high, roiling brown with soil and debris and buckled into angry white-capped waves, pressing on on out of the village, only to have to turn back as the road along the river to Ovingham was completely closed for repair.

Ooph. Plans already scuppered, I climbed out of Wylam up the same hill we usually come screaming down and ended up on the Military Road, heading for Whittledene Reservoir for the third week in a row. I’m getting predictable.

The reservoir looked high and bloated with rainfall, which seemed to have attracted a ballet, a bevy, a drift, a herd, a regatta, or a whiteness of swans, depending on your collective noun preference. Well, possibly not a whiteness, as a couple of these were youngsters and still a soft, fuzzy brown rather than pristine white.

From the reservoir, I took my usual route toward Stagshaw and through to Matfen. Climbing out the village and looking to change things up a little, I then took the first turn I came to and ended up on the Reivers Cycleway for a spell. This dropped me off at Ryal village and it seemed churlish at that point not to take advantage and drop down the Ryals.

Fun over, I turned to climb up through Hallington.

Just past the village the road was flooded and I picked my way carefully through, knowing just how rutted this road was and fearing submerged potholes or worse.

I then took the road toward Capheaton and eenie-meenie-miney-mo’d whether to call in to the café there, or press on to Kirkley. Kirkley won (just) and I routed through Belsay and straight down the main road until I’d by-passed Ogle, before turning onto quieter lanes.

I found our Dutch tag-team, TripleD-El and TripleD-Be, comfortably ensconced in the café, having smartly eschewed riding yesterday in the deluge.

Shortly after they left I was joined by Ahlambra and, in wide ranging and hugely entertaining discussion covering Covid-19, local lockdowns, the CIA, light-bulb inventors, US Presidents, the Clinton Foundation, false flag operations, Benghazi and a race of intergalactic, shape-shifting, immortal reptilian overlords (ok, I may have made that last one up) I realised I was in the presence of the clubs premier conspiracy theorist – and not everything is as it seems.

Sadly though, even hardened conspiracy theorists aren’t immune to the cold and while Ahlambra was warming to his topic, he was also beginning to feel the chill. Enough was enough, so we packed up and went our different ways – mine leading to a comfy seat in front of a double screened computer to simultaneously watch Stage 2 of the Giro and Liege-Bastogne-Liege.

Not a bad day at all.