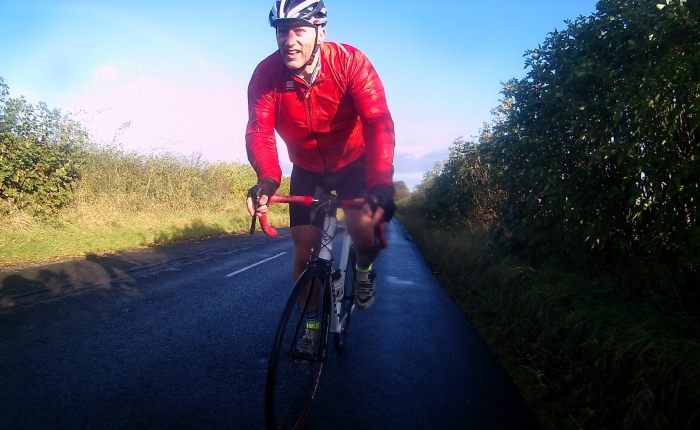 Heavy overnight rain passed, but left a rearguard of sporadic, unpredictable, light showers that punctuated the early morning, occasionally sweeping past, before fading quietly away.

I pulled on a showerproof jacket as I left the house and it stayed on my back for most of the ride out. Dropping off the hill, I spotted a couple of cyclists ahead of me as I traversed the valley floor and gave chase. Always a good incentive to pick the pace up, and I caught and passed them as we cut through Blaydon.

Luckily, the stiff headwind that had blown down the Tyne Valley last night and that I had battered myself against on the commute home, seemed to have dissipated. It was just as well, as we were heading straight upriver, to just outside Corbridge for our annual club hill climb up Prospect Hill.

I crossed the river, turned my back on what little wind remained and pushed through to the meeting point arriving in good time.

OGL turned up, checking we had enough volunteer officials for the event, before driving out to Prospect Hill to set up. Crazy Legs and G-Dawg had once more volunteered as official starters and time-keepers at the bottom of the hill, with Benedict set to provide timings at the top.

Mindful of typical Hill Climb weather (usually very cold and very wet) each had prepared appropriately, with Crazy Legs packing at least two jackets, while G-Dawg was wearing a heavily insulated, quilted winter jacket. Perhaps most sensibly, Benedict had a kit bag stuffed with warm clothing that he gave to OGL to transport to the hill for him.

Before leaving, OGL asked who was actually going to ride the event. Out of the twenty plus riders there, only Rainman stuck his hand up. The rest of us were all wimps, or had tried-and-died once too often on the slopes of Prospect Hill. (One day I might return for a final crack at our Hill Climb but not this year.)

What can I say, Rainman is either brave, or foolish. Or both. Then again he is Dutch, so maybe normal rules don’t apply.

The poor response caused a suitably disgusted OGL to wonder what kind of riders we actually were. Some would argue sensible and sane, but I know that’s a lie, so I’m not sure what the answer should be.

On other fronts, Crazy Legs was eagerly awaiting the publication of this years Tour de France route, primed for an excursion via camper van to the venerable Bourg d’Oisans campsite, to watch the pros take on some iconic Alpine climbs, such as the Alpe d’Huez, Col de la Croix de Fer and the Galibier.

This, we quickly decided, was far too much of a mouthful for us ignorant and lazy Brits, so it quickly became PDF and Super-PDF – a diminutive that I feel is likely to stick.

I’m not sure whether his plans will need to change, given the subsequent unveiling of a rather unusual Tour route, that seems to deliberately avoid all the traditional, tried and tested big climbs.

With around 24 riders gathered, even if not everyone was riding the hill, we felt we’d be able to at least provide support for our Go-Ride kids, as they hurled themselves upward with mad abandon. I’d even tried downloading a cow bell app to my phone, but had to admit being unimpressed with its desultory, sotto voce, and unremarkably dull clunking. It wouldn’t get used.

With the need to get to the hill as quickly as possible, G-Dawg had us marshalled and ready to go bang on 9:15, although, as he rightly acknowledged, they (literally) “can’t start without us.”

We picked our way out of the city en masse and I’d pushed onto the front alongside G-Dawg as we made the turn toward the river. Just past the corner, Crazy Legs looked back.

Our numbers had essentially halved. Support on the hill was going to be noticeably muted and quite sparse then.

On we went, threading our way through periodic sharp showers and bursts of bright sunlight, angling ever westwards, occasionally flanked with arcing rainbows that seemed to mark out our final destination.

Every time we were lashed with another sharp shower, Crazy Legs gleefully reminded us that the weather forecast promised “only a two percent chance of rain.” It seemed to be a line he was able to trot out on more than half a dozen occasions.

Down into the valley and along the river, G-Dawg found himself over-heating in his padded, quilted jacket and seemed to be looking forward to the odd, cooing rain shower, even as they became less and less frequent.

He checked everyone had the requisite documentation and inoculations, before bravely leading us across the bridge and into wild, savage lands, south of the river … welcome to Mordor, have a nice day.

We were on the final push now, pausing only to carefully skirt a devastating roadkill, an untidy pile of featureless, pink, blancmange like sludge, scraped into mouldering heap in the middle of the road. Try as we might, we were completely unable to discern any trace of features that would give us a clue and help us determine what type of poor creature had contributed its corporeal body to form this unsightly splatter.

Rainman roared off the front for an extended warm-up and by the time we’d reabsorbed him, we were at our destination – by G-Dawgs reckoning we covered around 40kms at a decent clip and in less than an hour and a half.

Perhaps shamed into riding, 7 or 8 of the seniors decided they would give it a go and joined the swarms of happy, excited Go-Ride kids, queuing up to sign on to ride the hill. Even our FNG decided to take part. Will he ever forgive us?

I helped pin on a few numbers, before making my own way up the hill to a junction about halfway up where I could provide some slight vocal encouragement and snap a few photos of the contestants for the group Facebook page.

It was great to see the kids hurling themselves uphill with reckless abandon, sometimes on their own, sometimes with parental outriders providing escort duties.

Cowin’ Bovril volunteered to escort one of the kids, acting in loco parentis and later admitted he’d had a good workout and he struggled to stay ahead of his young charge with the finish line approaching.

As the last riders came past I was joined by Rainman and Buster, both celebrating new best times on the hill. We made our way down to the start line again, where numbers were unpinned and all the shed weight (bottles, pumps, jackets et al) reclaimed.

We then just had to wait for Princess Fiona and Mini Miss to rejoin us. Neither had been seen since they’d finished their efforts up the hill, and had taken OGL’s advice on the best route back down to the start. They eventually appeared from completely the wrong direction, having been who knows where and complaining bitterly that they’d been sold a pup.

We then let Den Hague guide us through the tortuous labyrinth of Corbridge’s one-way traffic system, before we made our way to Valhalla, no, hold on, that’s not right, to Vallum, our cafe of choice for the day.

Main topics of conversation at the coffee stop

A quick check of phones revealed that Eliud Kipchoge had managed to break the two hour record for the marathon. You can’t help but be impressed by someone running a 100 metres in about 17 seconds and then doing it again and again and again, without pause, 421 more times in a row.

Spry, seemed slightly underwhelmed though, pointing out it wouldn’t be a recognised world record, as this wasn’t an open competition, Kipchoge was led by a pace car and accompanied by a phalanx of pace-setters, with bike riders on hand to hand over fluids as needed.

Kipchoge even had a laser directed at the road in front of him to keep him on pace, something I seem to recall was proposed for the Wiggins’ Hour Record, but the UCI rejected. (I’ve seen Cat#1 wildly chasing the red dot of a laser pointer and can confirm it is the most insidious form of mechanical doping known to man. Or feline.)

Anyway, we suggested that Spry take to Twitter to inform Kipchoge his record was worthless. Having already used this medium to allegedly enrage Elaine Paige fans as well as lambast Philip Deignan for having the temerity to marry Lizzy Armitstead, we reasoned adding one more mortal enemy on social media wouldn’t be too much of a burden.

By the way, can I please ask why long distance runners have taken to wearing arm warmers with a vest? At least Kashoge’s managed to match his to his top, unlike recent shocking efforts from Sir Mo, but nonetheless, it’s not a good look.

Meanwhile, Spry confirmed his single-handed, Go-Pro-armed, vigilante crusade to eradicate bad driving on the mean streets of the nation’s capital was going well – with 17 incidents reported to the police, of which 15 had resulted in cautions being issued. Not exactly crime-fighting worthy of a superhero, but you’ve got to admire his efforts.

As we were leaving, Crazy Legs vowed to hmm, maybe, perhaps, possibly, consider taking part in next years hill climb, before looking at me meaningfully, as if to remind me that as a friend I’d promised to never let him do it, ever again and I had a solemn duty to protect him from himself.

Leaving the cafe, we were soon skirting Whittle Dene Reservoir and, with the time already rapidly approaching when I’d usually be home, I swung off to head back down into the valley to make my way home.

The sky had cleared, it was a bright warm day and I had a good trip back, arriving just in time to catch the last 40kms of Il Lombardia. The Race of the Falling Leaves always signals the end of the pro-cycling season to me, despite whatever nonsense the UCI gets up to in the Far East. It’s a sign that winter is approaching and shiny plastic bikes are soon to be packed away until better weather returns.

Hopefully we’ll have a decent winter and there wont be too many interruptions to our rides. Still, I’m sure the Flat White Club is primed and ready if the conditions get too testing.