Main topic of conversation at the start:

According to his Faecesbook post, OGL undertook an epic ride of over 85 miles on Good Friday, two thirds of which he claims to have completed all on his lonesome.  The BFG won the impromptu sweepstake by correctly anticipating OGL would mention his own “epicness” within the first 2 minutes of arriving at the meeting point. We were not disappointed.

Then, unwittingly and unlooked for and with no prompting at all from his audience, OGL once again launched into the gruesome tale of scrotum-meets-stem-during-track-meet, replete with an all too vivid description of the catastrophic ripping and rupturing that ensued and the stitching needed to make him whole again.

Attire, a fully-paid up member of the Cult of the Racing Snakes listened to this bloody tale impassively, then reached into his jersey pocket, wrestled out an entire Lyle’s Family Sized Golden Syrup Cake Bar (typical number of servings per pack = 9) and proceeded to devour it almost whole, gnawing through and around the different layers of packaging to get to the sticky goodness within.

Seeing such a massive cake bar being cavalierly brandished and then demolished, the Red Max felt it put Taffy Steve’s choice of puny cereal bars to mortal shame and he pressed Taffy Steve to reveal just how inadequate and insecure this made him feel.

The BFG had a cunning plan to not only ride every one of the four club runs over the Easter weekend, but complete each one on a different bike. With this in mind he rolled up astride the carbon on carbon uber-bike and immediately began praying to the weather gods for a dry day on Sunday so he could venture out on his wooden wheels.

The Prof informed us he’d manage to wrestle Mrs. Prof’s gear hanger back into some semblance of functionality and she’d been able to limp noisily home from her mechanical yesterday, albeit with the rear derailleur threatening to hurl itself bodily into the back wheel and playing a clattering tune on the spokes, as carefree as a schoolboy running a stick along park railings.

The Monkey Butler Boy complained about the pink stem cap that had appeared overnight on his bike following the Red Max’s latest round of refits and improvements. Max suggested it was there to remind the Monkey Butler Boy of how girly he is every time he looks down and said that he’d even considered having “You’re a big girl” engraved across the top.

Main topic of conversation at the coffee stop:

The Lance Armstrong film, The Program came under critical review and received the massive ringing endorsement, “Yeah …  it’s all right”

I criticised Ben Foster for having to take drugs in order to be able to act like someone who took drugs, reminding Taffy Steve of Laurence Olivier’s fabulous response on seeing Dustin Hoffman’s “method” acting technique of not sleeping and making a mess of himself to get into character while shooting Marathon Man:  “Dear boy, it’s called acting.”

[The venerable Toshi-san remembers Olivier’s retort as “Try acting, dear boy. It’s easier.” Which may be inaccurate, but is even better.]

Spry felt the actor who played Michele Ferrari really let the film down with an awful and unbelievable cod-European accent, only to discover the actor, Guillaume Canet was actually French, so plausible Italian shouldn’t have been that much of a stretch.

Someone wondered why Jan Ullrich didn’t feature and I think we all had in mind candidates to play the hapless, rotund German who never seemed to get to grips with the temptations of the off-season.

So, here we go then, day two of the Easter holidays and the second day in a row that I’m allowed out for a club run. I guess I was just born lucky. Or maybe the family are happier in my absence and I’m just unwanted in my own home.

The perfect, blue skies of Friday had gone however, leaving a grey, windy and even chillier clump of weather to be negotiated, with a burst of heavy rain being forecast to make an unwelcome appearance around midday.

The camera slung under the saddle appears to be producing one or two decent shots in amongst a mountain of dross and discards, so would be put into action again. One or two of the riders captured have even adopted the photos for their personal Faecesbook profiles, maybe there’s no higher compliment.

This got me wondering if I might get embroiled in an argument over royalties and image rights like David Slater and his monkey selfie. All it really needs is for someone to champion and care for the rights of cyclists the same way they do for hugely vicious, vermin-raddled, wild monkeys – c’mon, surely MAMILS are more lovable and worthy than crested macaque’s? Anyone? No? Oh, well…

Arriving at the meeting place there were a handful of survivors from Friday and a whole new batch of fresh riders eager to stretch their legs and dish out a little pain. Once again then a fairly sizeable group of just under 30 of us pushed off, clipped in and set out.

Things were going well until we stopped at a T-junction and I watched in disbelief as the BFG fell like some majestic giant redwood, slowly and silently toppling to crash into the ground while still clipped firmly into his uber-bike. I’m still not sure whether he was attempting a smart-arse track stand, was having cleat problems or simply forgot what he was doing – either way the results were unintentionally comic.

He shamefacedly picked himself up, scrubbed ruefully at the scratches on his no-longer pristine brake hoods and tried to nonchalantly side foot the debris back into the crater his impact had created in the road surface. Maybe now people won’t be so intent on pulling stupid-ass stunts – wheelies, track stands and other shit while riding in a group.

We recovered and pushed on, Crazy Legs and Goose hitting the front for an epic and marathon effort into a strengthening and debilitating headwind. Chapeau guys.

At the split Crazy Legs went off to recuperate a little with the amblers, but Goose stuck with the longer, harder, faster group of around a dozen or so, finding the going quite hard after all his sterling work on the front. 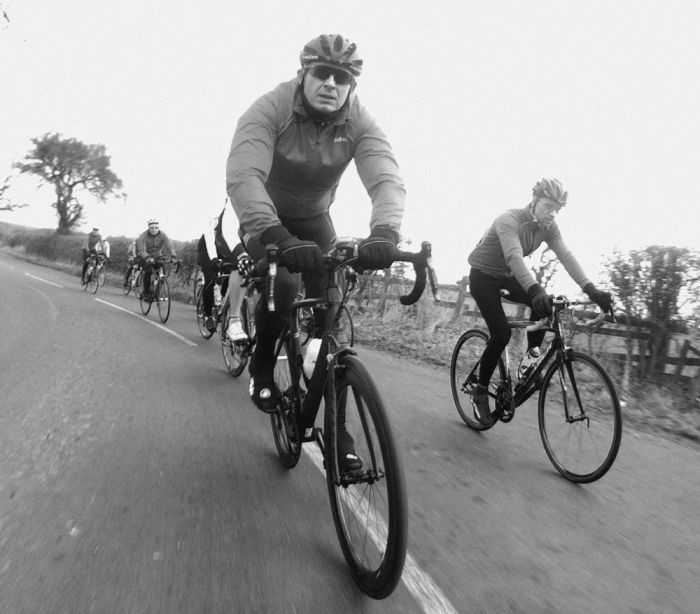 I felt good and led on the first couple of hills, but the legs tired quickly and began to feel heavy and full of hurt.  Although we took a completely different route getting there, we were soon once again heading for the Quarry climb and then the slow burn to the café.

I managed to stay with the lead riders to the top of the Quarry, but was distanced for a while shortly afterwards trying to recover. We then all regrouped on a downhill section and the pace began to build.

Pierre Rolland look-alike Spry put in a perfectly timed attack on the next short rise and splintered the group. The rider whose wheel I was on lost contact and by the time I’d gone around him the gap was too great to shut down.

I was on the drops and working harder than I had on my solo break the day before, but the gap at refused to close and then ever so slowly yawned open. I pushed on regardless, bouncing and rattling over the uneven road surface and limped into the café some way behind the leaders and appropriately sur la jante.

Inside we found Plumose Pappus home from university for the holidays and intent on turning all the paper napkins in the café a bright shade of red. He was managing all of this from a deep gash in his elbow where a large crescent of flesh seemed to have been crudely hacked out and according to the BFG he looked even paler than I did after the hill climb.

From what I can gather from the muddled conversation around me, Plumose had fallen whilst trying to take a jacket off mid-ride. If true, maybe now people won’t be so intent on pulling stupid-ass stunts – wheelies, track stands – oh, sorry – you’ve heard that already…

The Red Max once described Plumose Pappus as the only man with legs the same diameter as his seatpost and Taffy Steve had calculated he was exactly twice the young feller’s weight. The worry now is that with a sizeable chunk out of his arm he’s going to weigh even less and be even more difficult to hold back on the climbs. It’s a radical form of weight loss and perhaps one that should be kept from Sir David Brailsford and his dogged and unwavering pursuit of marginal gains.

Plumose Pappus was bundled into his mum’s ambulance/voiture balai, no doubt destined for the local A&E and an intense bout of wound cleaning and stitching up. When he recovers he’ll have a great opportunity to swap hoary old injury stories with OGL and perhaps one day, if he’s brave enough, they can even compare scars.

Meanwhile, back in the café I was successfully inviting my fellow cyclists to sit like a human shield between me and the fire which was roaring and throwing out heat with the intensity of a Krupp blast furnace.

Ever the pragmatist, Taffy Steve took the much more effective step of simply negotiated with the café matron to have the fire turned down, or for them to at least not bother throwing another sacrificial cyclist onto the blaze. Mission accomplished the stop at least became bearable.

On the return home we hit roadworks and were stopped at some traffic lights. OGL spotted a car pulling into and lurking in parking space on the wrong side of the road and rightly guessed he was going to jump around us when the lights changed.

Suitably warned we were able to avoid getting unnecessarily caught up under his wheels and impeding his entitled progress. The danger wasn’t over though, as a truly moronic RIM in a white Transit van tried to shoot the gap between the lights and cyclists forcing us to dive out of the way again. We watched in complete and utter astonishment as he then drove 20 yards past the lights and turned off the road and onto a driveway. What a complete and utter arse hat.

The legs were heavy and hurting, but I managed to hang in the group until the first split when the remnants entered the Mad Mile and started to accelerate away for one last blast. I let them go happy with my own pace and preparing myself to turn off and into the headwind for the trek home.

Things weren’t too bad until I started to drop down to the river, finding the wind was so strong I had to pedal downhill to maintain momentum. As I crossed over the bridge the first drops of a light rain began to sift down, but I was on the climb of the Heinous Hill before it began to fall with any real intent and safely indoors before the heavens truly opened.

Two hard rides in two days, both enjoyable, but I really do need to rest and recover now. I’ve also discovered that doing two club runs in succession is a challenge, but not nearly as difficult as two blog entries.

I’m quite looking forward to the resumption of normal service next week.