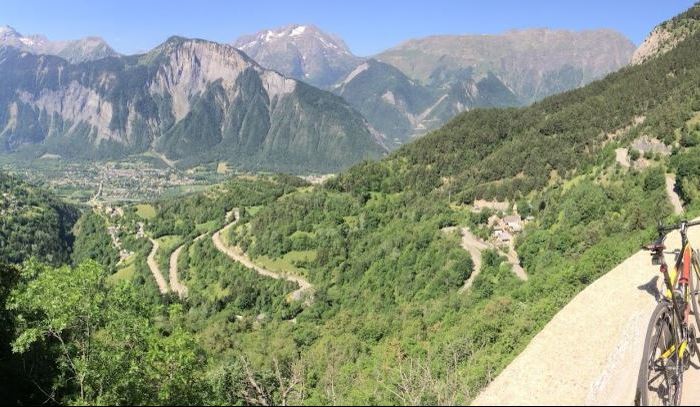 I awoke rather groggily to find someone had broken in during the night and filled my legs full of concrete and it took me a while to get moving. When I did, I found Crazy Legs busily flitting around and dressed to ride.

I needed to ride to try and rediscover where my legs were.

As we reached agreement, Captain Black emerged, blinking and yawning. Rest had obviously done him good and Twatty MacTwat Face had reverted back to being Old Faithful. I told him the plan and he hauled his ass into gear too – 3 for the Alpe!

It wasn’t much longer than 15 minutes later and we turned right out of the campsite, pushed the pedals around half a dozen times and found ourselves once again on the first ramp up the mountain to L’Alpe d’Huez.

I took the first couple of hairpins out of the saddle and turning a modestly large gear, until feeling returned to my lower extremities and the stiffness stated to dissipate. I then dropped onto the granny ring, and plonked myself down to spin slowly upwards.

Behind me Captain Black got half way round the first hairpin and was shocked to find just how hard it was. Just before he turned round to head back, thinking he obviously hadn’t recovered from the day before, he finally looked down and realised he was still on the big ring. There was a sudden, resounding, clunking, wince-inducing clang of stressed and tortured metal that reverberated around the mountains, as he changed down under intense pressure and finally found instant relief and his climbing form.

The three of us worked our way slowly up the mountain, pausing frequently at various shady vista’s and viewpoints, picking out the past winners signs on the corners, taking photos and chatting with other cyclists.

The signs were a roll-call, highlighting some of cycling’s great and good (and occasionally villainous) – both past and present, ranging from the imperious, il campionissimo, Fausto Coppi in 1952, right up to Thibaut Pinot in 2015.

Lance Armstrong’s name is still up there (twice) despite having his Tour victories annulled, along with two for the equally dubious and questionable Marco Pantani, who still holds the record for the fastest ascent of the mountain in an astonishing – no doubt rocket-fuelled, but still astonishing time of under 38 minutes.

I have to admit though, that even taking time to hunt them out and read the signs, I still missed one or two, including Joop Zoetemelk’s 1976 sign which I’d vowed to desecrate in honour of Lucien Van Impe. (Only kidding, nice Dutch folk!)

As previously mentioned, I found the signs totally underwhelming – so much so that I didn’t even bother photographing any of them – but here’s one I prepared earlier (or pinched from the Internet anyway).

As we were making our way around one hairpin, our bête noire from Saturday made a reappearance, as a bumbling Harley Davidson blatted loudly up the road and awkwardly around the bend, leaving a trail of greasy exhaust fumes in its wake.

“Your bike’s shit!” an indignant Crazy Legs shouted after the motorcycle, unfortunately just as another rider pulled up alongside him. This rider gave him a long, quizzical look before deciding he was in the presence of a sun-touched Englishman and he didn’t need to defend the honour of his Cannondale SuperSix. Just to be sure, he accelerated smartly away to avoid further insult to his bike and Crazy Legs can at least take a little credit for spurring one rider on to set a good time.

At the village of La Grade we stopped in a welcome patch of shade, where an elderly rider and his support-vehicle-driving wife were sitting enjoying the views. Our talk turned to decomposition rates as Captain Black enjoyed a belated breakfast banana and Crazy Legs described in intimate detail how the discarded skins turned black, slimy and wizened along the way. “Speaking of black, slimy and wizened,” he declared, starting to reach down the front of his shorts, “My knackers could do with a bit of relief.”

“Hey, nice day, isn’t it?” the support-vehicle-driving wife drawled, stepping in with a nice bit of deflection.

It turned out they were American, from California, on holiday so the husband could enjoy a second-crack at riding the Alps. We then had a brief chat which concluded rather awkwardly when the wife offered sympathy over the “terrible, tragic things” in the UK and we had to ask whether she meant the terror attacks, the Grenfell Tower fire, or being lumbered with lame-duck, Prime Minister who would sell her own mother cling to power.

She meant the tower fire, which is obviously a cataclysmic tragedy, but not something we were ever likely to be personally invested in and it seemed an odd, discordant thing to bring up with total strangers on a bright sunny day, half-way up a mountain in France.

We kept going and stopped again at what we think was Dutch Corner, afforded the opportunity to look down and appreciate how far we’d climbed, the vista opening out to show the road below, twisting and turning sinuously through multiple hairpins as it snaked up the mountain. Crazy Legs recalled watching the Dauphine from this vantage point in 2010 as a rampant Alberto Contador made multiple impressive attacks before breaking clear to win the stage.

As we pushed on the other two slowly drew ahead and I was happy to trundle along at my own pace, slowing down and swinging right across the road to peer myopically at the signs on the hairpins and try to pick out past Tour stage winners.

More snaps from the photographers, the long drag upwards, a sarcastic slow-hand clap from the inflatable King of the Mountains and I was across the finish line and taking a seat next to Crazy Legs and Captain Black in the same café we’d stopped at the first time up the Alpe. Captain Black won the race to first beer of the day.

And then we spaced ourselves well out for the fun of the descent. It was to be this, more than anything, which gave me an appreciation of just how big a task cycling up a mountain actually is – it took almost 15 minutes to whirr down to the bottom and every hairpin I thought was the last one was followed by another and then another. Looking back around the corners was also the first time I appreciated just how steep some of the ramps actually were, it’s not something you get a good impression of while struggling up them.

And then, sadly it was over, we were done and back at the campsite and climbing off for the last time.

By this time my legs no longer felt like concrete, maybe more like hard cheese – a Cheshire or a Red Leicester perhaps. Either way an improvement of sorts. We broke the bikes down and packed them up, then picked up Steadfast and wondered into town for a few drinks and a late lunch.

The patron of the bar was apparently quite upset she couldn’t offer us any food, “Je suis desole!” but we were happy with baguettes and cornets des frites to accompany the beer. The Hammer joined us, fresh from a ride up to Allemont and then finally Goose appeared after a day alternatively spent walking and lazing by the pool. A few beers and we wandered up to the Dutch restaurant for the last supper.

All this time we talked an unending stream of nonsense (as usual): how Pierre Latour somehow acquired the name Roger, the immorality of any sport that needs judges to decide a winner, Tyneside legend Dave the Dwarf, once spotted drinking in the incongruous company of towering Scottish lock forward Doddie Weir. This led to an attempt to calculate how many dwarves you could reasonably expect in China’s 1.4 billion population and serious concerns about where all the Chinese dwarves are hiding.

We learned that Goose had been inspired by tales of a granny who was arrested for pointing a hairdryer at speeding cars in her village during a (seemingly hugely successful) attempt to get them to slow down. He revealed he had then taken this as inspiration for his own brand of traffic vigilantism, patrolling the streets around his home and leaping unexpectedly out at any motorist he suspects of speeding, arm raised, hand out while intoning a very simple, authoritative and stentorian: “No!”

We managed to calculate bills and work out a way where no one (hopefully) felt out of pocket and discussed doing something similar next year, or the following, although Crazy Legs declared he’s more or less done with the Alps, so we thought up a few alternatives such as Spain – the Pyrenees or Basque region, Tuscany, or perhaps, radically even somewhere flat like the Netherlands.

And then we wandered back, packed and slept, woke and showered, loaded the van, endured an unfriendly chalet inspection, settled our bills, waved off the Hammer and set out for home.

Swiss custom officials were strangely no happier to see us go than they had been to see us arrive and Heathrow customs officials managed to outdo them in terms of inertia, apathy and glowering disaffection.

We bade “bon voyage” to Steadfast, returning to his home along the south coast and the Goose wandered off in search of the best deals he could find on Toblerone. While we waited for our connecting flight, Captain Black stood us a round of coffee’s and had to double-check the price several times before he realised he wasn’t in Geneva airport and didn’t need to take out a second mortgage to pay for them.

The “barista” asked for his name and he momentarily confused me by saying Ant rather than Captain Black, or just the Captain. He obviously confused the barista even more as the coffee’s arrived with “Hans” carefully scribed on every cup.

“Oh no,” I suggested to Crazy Legs, “That makes you Knees and me Boomps-a-Daisy.”

We then sat around discussing the worlds woes and how to correct them, until Crazy Legs looked at the flight board and realised our gate was closing in 10 minutes and we were in real danger of being left behind!

A quick, power-walk through the terminal had us tagging onto the very back of the queue, before clambering aboard our connecting flight to Newcastle and home.

At the other end we kept an intent and anxious watch on the baggage carousel, waiting for the arrival of bike bags and boxes and getting a little concerned as time dragged on, the crowd started to thin and the conveyor belt slowly emptied. Then Goose took a step backwards and fell over our bikes which the ninja baggage handlers had delivered by hand and stealthily dropped off right behind us.

Over the three days we were out on the bikes for 22½ hours, rode 251 kilometres or 156 miles in around 14 hours with almost 6,900 metres of climbing including, L’Alpe d’Huez (twice), the Sarenne, Lauterat, Glandon, Croix de Fer, Télégraph and mighty Galibier.

BA Flights form Newcastle to Geneva via Heathrow cost £160 each.

The total cost for my trip was around £372, plus meals, food and drinks.

Having been back a couple of weeks now, I can honestly say if someone offered me the exact same trip, with the exact same rides (even including all the pain and misery of the Circle of Death) I wouldn’t hesitate and I’d sign up immediately.