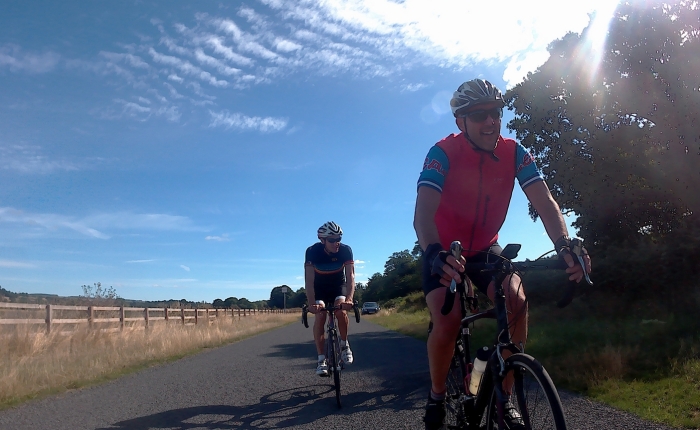 I’m due to fly off on a family holiday sans velo, so this is necessarily going to be quick and dirty. Who knows, maybe I’ll realise a shorter, more concise and condensed style of writing suits SLJ and that terse is the new verbose …

The Red Max had volunteered to plan and lead the club ride on Saturday and had helpfully outlined the route as we stood chatting after the club time-trial on Thursday evening. We would, he said, be heading down into the Tyne Valley, dangerously flirting with the very borders of Mordor, but not actually daring to cross the river at any point.

He then rather cryptically concluded, that we would then work our way back to the café by running the Zig-Zags Backwards. I nodded along sagely, but had absolutely no idea what he meant, where he was referring to and still don’t know if we did indeed end up running the Zig-Zag’s backwards on the day.

I was late getting started first thing, so risked surfing the early morning traffic to cross the river at Scotswood, rather than my usual, quieter route further upstream. This saved me a few miles and a hatful of time. It didn’t save me a climb out of the other side of the valley, where I quickly found I was still suffering from the depredations of Thursday night. My legs were heavy and hurt.

A decent sized group were out, so we split into two, with the Red Max bravely volunteering to lead the second group and submit himself to any cavils and carping from the Grognard’s. Unlikely, though that such carping might be, you just never know …

We could usually rely on walking Sat-Nav and Route Master, G-Dawg to keep the front group on song, but he was busy elsewhere this morning, riding a Team Time Trial with Crazy Legs, Captain Black and the Hammer. Between Aether, Richard of Flanders and me, we felt we had an almost workable grasp of the planned route, but decided to regroup at Stocksfield bridge where we could get further guidance.

All went according to plan and, barring a thoroughly tuneless rendition of “Gordon is a Moron,” we had a wholly uneventful ride out.  The front group was soon camped out in the sun, indulging in a game of Word Association Football with the Garrulous Kid, while we waited for the second group to put in an appearance.

This game was initiated when the Garrulous Kid spun some tale about the Monkey Butler Boy confronting a black (?) cougar (?) in his back yard (apparently quite a common occurrence in Wallsend).

Then we simply added fuel to the fire, in a conversation that would suddenly ricochet from cougars, to cat food … to the reintroduction of extinct native species … from bears, to lynxes the size of pit ponies … to cheap, adolescent deodorants, to MILF’s and ginger-haired sirens … to haircuts and first dates, before wildly veering into genetics and biology, through citizenship, to killer red squirrels, James Burke and the end of the world as we know it.

Each, daring, darting leap the Garrulous Kid made from one unrelated subject to the next was, if not logical, at least traceable to a particular trigger, but none of it made any kind of sense in retrospect and keeping up was as wild and exhausting as hanging onto the back of the bunch during a café sprint.

Eventually the groups coalesced, shuffled around a little and faster and slower groups formed and set off again, all following the same route, but at variable speeds.

We climbed, then climbed some more, until we were splintered and spread all up and down the road. I was up with the front-runners, but my legs were dead and I was struggling to hold on. I dropped off the back to where Benedict was leading a chase group, hung with them a bit and then we managed to bridge across to the front.

This larger group then kept together until we finally hit Matfen and the run in to the Quarry Climb, when I became detached again and found myself hanging at the back of another, small chase group, alongside Buster, Zardoz and Gunny (a Guy With No Name Yet).

We were on the team time trial course, but our squad of G-Dawg, Crazy Legs, Captain Black and the Hammer, had been one of the first out of the gate, so hoepfully (in the nicest possible way) we wouldn’t see them. We did witness a whole slew of different teams though – some superbly drilled, tight and organised, others looking like they were out for a normal club run and simply ambling along, one or two already reduced to 3 men (or women) and likely to struggle.

I had recovered enough to drag the group up to the Quarry climb, but hills were definitely a problem for me today and it was hard work. We pushed on toward the café and, as my speed dropped, I ceded the front to Buster. Again, with a bit or rest and recovery in the wheels, I hit the front again on the slow drag up to and through the crossroads.

Zardoz spelled me next, on the run down to the Snake Bends and then we were through and onto the final run to the café.

At the café, Den Haag went for a sandwich option, with all the trimmings. Somewhat surprisingly, “all the trimmings” turned out to be a small crescent of watermelon and a pineapple rhomboid, artfully speared on a cocktail stick. Seeing someone buy a sandwich instead of cake was novelty enough for us, even before taking into account the somewhat … err … exotic and eclectic garnish.

Caracol surmised that the café probably now had one largely intact watermelon, with just one tiny segment carefully incised from its side and, unless there was a sudden run on sandwiches “with all the trimmings” they’d be throwing away 99.9% of the melon tonight and buying a new one for tomorrow.

This discussion led Biden Fecht to recall a holiday in Greece, when the drinking water ran out and the only source of safe rehydration was locally produced watermelon – a refreshing change for a day or two, but he reported that the novelty soon wore thin.

Den Haag wondered what the options would have been for anyone on a cycling holiday, reasoning it wasn’t entirely practical to lug around a couple of watermelons in your jersey pockets and they probably wouldn’t fit into a standard bottle cage.

I wondered about drilling a hole in a couple of watermelon and sliding them onto the bar ends, for easy transport and an additional safety feature too. Den Haag though suggested carving one into a functional and potentially cooling helmet, that you could then easily transport by wearing it on your head.

Our sporting entertainment options for the weekend appeared to be limited to the European Road Race Championship in Glasgow. Andeven was wondering what the course was like and I suggested it was the one used for the Commonwealth Games. This, we recalled was won in a solo break by a young Welsh tyro, called Geraint Thomas, despite an untimely puncture in the final kilometres.

We concluded that Mr. Thomas was no slouch when it came to this bicycle racing malarkey and we felt that, sooner or later, he was bound to come good and win something of significance…

There was only time for the Garrulous Kid to wander past and protest that he didn’t have a thing for red-haired girls.

“Ah, it’s red-haired boys, is it?” OGL countered, to much spluttering and denial.

The run home was fast and furious and, not for the first time and, no doubt not for the last either, I was actually pleased to swing away from the group and start a solo perambulation back at a more relaxed pace.

Man, I was tired. I think I need a holiday.