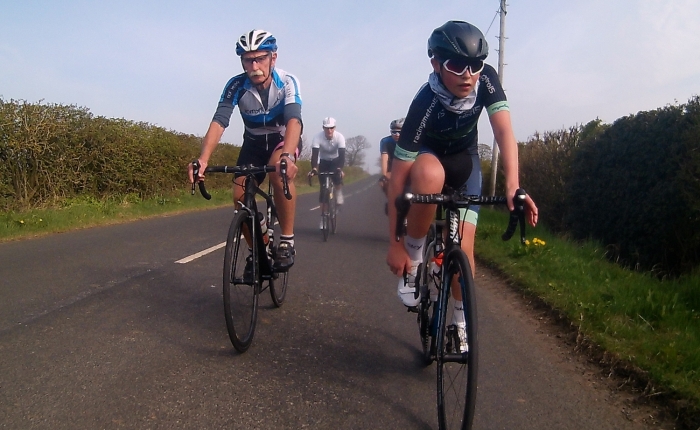 My ride (according to Strava)

The weather was set to be perfect, bright, warm and dry, the sky without cloud and the land without wind. Still, it wasn’t quite there yet when I first set out, with the air still chilly, so I hid under arm warmers and full finger gloves, all pulled over a necessary layer of sun-cream.

I had a very pleasant and totally relaxed ride across to the meeting point and arrived in good time to join G-Dawg admiring the obscene graffiti on the wall, before it was obscured by a flash mob of milling cyclists.

In the space of just seven days we found a startling contrast between last weeks wickedly cold start and this weeks balmy, sunny conditions. Everyone seemed to have dressed accordingly, well, other than Zip Five in tights, arm warmers over a long sleeved base-layer and overshoes and the Garrulous Kid, who was basically wearing the exact same kit he’s worn for the past 6-weeks… only this time it was appropriate to the conditions.

“You’re like a stopped clock,” Jimmy Mac informed him, “Just very occasionally you are, by default going to get it right.”

The Garrulous Kid is proving to be to football punditry what Theresa May is to international diplomacy and delicate negotiation. After his disastrous guarantee that Germany was going to sweep all before them and dominate the World Cup, his prediction that Man City were “nailed on” for a remarkable quadruple is starting too look ever so slightly suspect.

OGL rolled up, took a chemist’s prescription bag out of his back pocket and started emptying out the various contents, bottles, tubes and boxes of pills, to secrete about his person.

“What’s with the Jiffy bag?” some wag asked, while I started singing, “EPO, EPO, EPO” to the tune of “Here we go, Here we go, Here we go” – a variation
of the fiendish complex, difficult to master, classic football-chant, devised by the veritable Toshi San to serenade David Millar on his return to racing on British Roads.

OGL had the Team Sky deflection tactics down pat though, immediately switching the conversation to boxer Jarrell Miller’s failed drug-test, where he’d secured the grand slam of being popped for EPO, HGH and GW1516 (whatever that is) all at the same time. Still, Miller has wholeheartedly apologised, held his hand up and admitted he’s made a mistake … so, no harm done eh?

OGL then advised that roadworks meant traffic was backing up through Ponteland, so recommended we changed our route into the village. With that agreed, we picked a rendezvous point, split into two groups and away we went.

Things started out well, the pace was high, the sun was shining and the company amenable. I was just rolling up the outside of the group, picking up too much speed on a downhill section and too lazy to brake, when ahead of me, Spry’s bike jettisoned his tool tub. Stuffed with spare inner tubes and various Allen keys, it bounced once end-over-end and then rolled under my front wheel. I hit it and there was a resounding crack. My front wheel twitched violently and then straightened and I rolled on checking for damage.

My bike seemed fully intact and there was no puncture to deal with, but the impact had shattered the lid of Spry’s tool tub. I apologised for the damage I’d done as I passed him, back-tracking to pick up his discarded essentials.

We pressed on through Stamfordham and then up the hill to the lay-by, used for the start and finish of numerous cycling events. We pulled over here to wait for our rendezvous with the second group.

They duly arrived and we hung around for too long just chatting aimlessly and enjoying the sunshine, until OGL got tetchy and, pausing only to rebuke Plumose Pappus for having a grungy, rusting rear cassette, nagged us all into action again. Various splits and routes were agreed and we finally started up again.

Heading up toward Capheaton, Mini Miss picked up a puncture and it was back to standing around, shooting the breeze and waiting. I had a chat with Captain Black about the missing BFG (presumed to be still alive, but probably living under a(nother) false name, somewhere in the UK). We reminisced about the time he’d taken his bike into Boots to find the exact colour of nail varnish to match his chipped frame and ended up with a bevvy of beauticians and shop assistants helping him out. (Rimmel’s Pinking Out Loud and Max Factor’s Broody Blood Bouquet were the recommended choices. Although grateful for all the help, I’m led to believe the BFG felt the need to push back when it was suggested his cuticles needed urgent attention and a full manicure wouldn’t go amiss.)

Repairs made and on we went, following the route of last years National Road Race and cutting across the hills, through Hallington, to the bottom of the Ryals. Once again we marvelled that people actually race at full tilt down this narrow, twisting, pot holed, gravel-strewn and over-grown farm track.

I caught up with Richard of Flanders and we both agreed it was too nice a day to ruin it with an assault on the Ryals, but that’s exactly where we were heading.

I was drifting toward the back of the group when we made the turn and hadn’t gone far, when Jake the Snake, the Dormanator, pulled up with a puncture.

Our calls went either unheard, or unheeded by those in front and they pressed on leaving six of us to help sort out the puncture and then make the run for the cafe. I joined Aether in helping Jake the Snake replace his tube, while an overheating Zip Five tried to shed some layers and Rab Dee, in a move that was pure Jacques Anquetil, drained his water bottles, declaring he didn’t want to carry any extra weight up the climb. The Ticker then admitted he was a Ryals virgin and this would be his very first introduction to their nasty, brutish ways.

Underway again and rolling toward the climb, I passed the Ticker, whistling a little too nonchalantly and I commended him on his show of bravado.

Then we hit the first ramp and started to go up. I followed Rab Dee and Benedict closely up the first ramp, but didn’t feel I was in a comfortable gear and I was spinning a bit too wildly. As the road dipped down before climbing again, they changed up and kicked on, opening up a gap while I freewheeled, trying to recover and find a comfortable gear for the second ramp.

Then the slope bit again and I gave chase, slowly closing the gap, but running out of hill before I made it all the way across. We rolled down to the turn for the Quarry, where we stopped to regroup. After several minutes, with no sign of the Ticker, I started to backtrack, hoping to pick him up.

I’d almost made it back to Ryal village when he finally appeared, having suffered what he hilariously described as a “chain wedgie” – shipping his chain and getting it jammed between chainring and bottom bracket, or cassette and free hub … or maybe both at the same time.

“That’s what you get when you’re desperately looking for the secret 12th sprocket on an 11-speed cassette,” I told him.

After the Ryals, we made short work of the Quarry and started to pick up speed for the cafe. Once again I found myself on the front for the drag up and through the crossroads. It’s becoming a very bad habit.

I stayed on the front up to the final junction, when Rab Dee took over and kicked away. Closing fast on the Snake Bends, I pushed in front of him again, he took the briefest of micro-pauses, just enough to collect his breath, before he surged away.

I couldn’t follow, but we seemed to have left everyone else trailing in our wake, so I sat up and coasted through the bends.

We recalled Goose, perhaps the least brand aware amongst us, being accosted by the one-time distributor of Storck bikes in the UK, who gave him the full-court press in trying to persuade him to drop £3 grand or more on a new bike, without really being able to justify the price tag, or read his audience with any degree of accuracy or empathy.

In discussions with Captain Black, I did the Ryals a disservice by suggesting they didn’t get much above 7-8%. The VeloViewer site characterises the “official” climb as being 1.5 km long, with an average gradient of 4% and a maximum of 16.8%.

Whatever the actual statistics, I think my point is still valid, it’s not an epic, enjoyable, or particularly memorable climb and I never feel any great sense of achievement topping it. I can imagine it does become brutal if you race up it, full gas 3 or 4 times in a race (such as next weeks Beaumont, or the Nationals Road Race) though.

We then played a kind of cycling Top Trumps, with Captain Black selecting the Tourmalet as the hardest climb he’s done, while, along with Goose, I went for the Galibier.

At the next table, the Monkey Butler was getting grief for his white, aero socks, but I refused to join in and condemn him, when the Garrulous Kid had two hairy, shapeless, baggy and grungy socks of no discernible colour, pooled around his ankles like two used and discarded elephant condoms.

Then, in a concession to the heat and inadequate pre-planning of layers, the Monkey Butler Boy re-appeared wearing just a gilet on his top half, arms bare to the shoulder. Socks be dammed, I immediately told him he looked like a wannabe triathlete and he couldn’t ride with us. Standards must be maintained.

As a parting shot, as we were packing up to go, I turned to Mini Miss, “What’s it going to be then, a Bianchi, or a Storck?”

She paused a heartbeat, before adding, “But I wouldn’t mind meeting a man with a Storck.”

Having been delayed by a couple of punctures, we were running late, so I peeled off to pick my way over the airport and shave a little distance and time off my journey home.

A couple of others came with me, at least as far as Ponteland, so I at least got another opportunity to apologise to Spry for destroying his tool tub.

Through Ponteland, I passed the long tail of traffic OGL had warned about that morning, as it backed up through the roadworks. Uncharitable as it seems, I have to admit passing the long, long line of drivers, cooped up and sweltering in their cars, made me smile and it buoyed me all the way home.