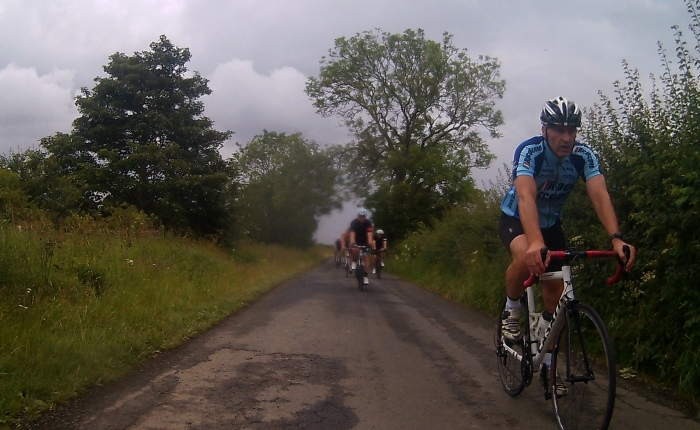 A quick hit before I disappear for a well-deserved (well, in my opinion) holiday on the Costa Blanca…

Saturday was sticky, hot and humid, even under granite coloured skies that promised to live up to the forecast of frequent heavy showers. The air was strangely still and breathless, mirroring the river which was dull, flat and as still as a millpond as I rolled over the bridge.

Last night I’d resorted to some creative bike wrangling to ensure Reg was ready, fully restored and, most importantly back home. I’d ridden into work on the single-speed as usual, but returned via the Brassworks bike workshop at Pedalling Squares, at the bottom of the Heinous Hill. There, I swapped bikes, picking up and paying for the work on the Holdsworth, before riding it home.

I’d then pulled on a pair of trainers, packed my cycling shoes in a rucksack and ran back down the hill to retrieve the single-speed. This was enough to reinforce my long-held belief that biathlon’s and triathlons are the creation of the devil.

Still, it was worth it, the Holdsworth was running true and smooth and as good as new. There’s something reassuring in finding a bike mechanic who’s a perfectionist. Now the potential for rain was about the only thing likely to ruin a good ride.

The sadomasochistic Buster had volunteered for his maiden role of ride leader, devising a route that was replete with just about all of our signature climbs in one neat package; Bell’s Hill, the Mur de Mitford, the Trench, Rothley Crossroads, Berwick Hill and Middleton Bank. I definitely needed any advantage a good bike could bestow.

The Garrulous Kid was just hoping to get to the cafe as fast as possible, so he could retrieve his sun specs, which he’d managed to leave behind the week before. G-Dawg told me they made the Garrulous Kid look like a bad Roy Orbison impersonator and he had visions of some old feller finding them, slapping them on his head and then walking blindly into all the tables and chairs as he tried to locate the exit.

I reassured the Garrulous Kid that I was certain they’d still be there as, from G-Dawg’s description, it didn’t sound like anyone else would actually want them. He then wondered if his water bottle would still be there too, as that was something else he’d forgotten.

I’m trying to see if we can develop an unofficial club jersey that more than two or three people are happy to wear, so had a chat with a few people about this, including Princess Fiona … which was when I realised I hadn’t considered a female option as (apparently) they’re built a bit different. I think this is going to be one of those projects that sounds easy, but the deeper you dig, the more issues you unearth.

A bunch of our riders had submitted themselves to a British Cycling ride leader course last Sunday, to allow them to officially take groups of youngsters out onto the open roads and introduce them to the mystical, mythical, ever-enduring club ride.

The course was an astonishing 8 hours long and preceded by a 3 hour computer test on general road safety and regulations – a hell of a commitment, that still didn’t get us to where we want to be. Apparently, ride leaders also require an up to date, First Aid certificate too – an additional course and between £15-£25 per person and then it’s only valid for 3-years.

Once we have all this in place, we would still only be allowed 8 junior riders for every fully qualified and certified ride leader and to cap it all, British Cycling charged the club £1,000 to run the course, plus the cost of the venue hire.

From talking to the group, many of the principles, guidelines and requirements they learned sounded rather Byzantine and restrictive and, well, a bit of a ball ache to be fair. I’m in no position to judge if the course teaches the best and safest way to lead a group of youngsters onto our undoubtedly dangerous roads, but the cost and time commitments alone seem to actively discourage clubs from doing this. I’m not sure how well this chimes with the mission statement of British Cycling to grow cyclesport?

With such a large group, we split into two and I dropped into the second group. Talk of enacting course leader principles were quickly shelved and we pressed on in our usual ramshackle manner.

I found myself riding alongside Sneaky Pete as we got underway chatting about Canadian singer-songwriters, the TV adaption of Joseph Heller’s Catch-22 and the right balance between practical colours for a cycling jersey and rider visibility.

I climbed the Mur de Mitford at a fairly relaxed pace and found myself alongside Taffy Steve as we pressed on.

“Ah, the Pigdon Prowler, ” I announced, referring to the Strava segment we now found ourselves traversing. “I wonder where that name came from?”

Taffy Steve agreed it was bizarre, but admitted to being far more interested in the etymology behind a different Strava segment: “Jonny’s Polish Shagfest” – having spend months trying to identify if we had any Jonny’s in the club he could interrogate to try and understand the origin of the Central European Shagfest and what relation it had to cycling.

Next on our list of came the Trench which again we seemed to run at a reasonable pace, before pausing to regroup. Just as we were determining shorter and longer options, our first group clambered up to join us, having been delayed when Caracol inexplicably tried to mate his rampant bike with Rainman’s. The only issue from this most unholy of unions had been a smashed derailleur, which had forced Rainman to abandon and call for the voiture balai to get him safely home.

Crazy Legs urged the front group to keep going at their usual, brisk pace, while the rest of us would trail along behind in our own time. Several defectors though took the opportunity to drop back into the second group, notably Goose and the Big Yin. Good for them, bad for everyone else as it prompted me to unleash my finest nasal, Dylanesque wail; “What’s the point of changing … horses in midstream.”

Having somehow survived my intemperate wailing, we pressed on toward Rothley crossroads, taking the much maligned and hated traditional route, rather than the equally, or even more maligned and hated novel approach that Taffy Steve had recently inflicted on us.

As the gradient bit and the speed dropped, I pushed onto the front alongside Goose to help pace us up and over the cross-roads. We repeated the exercise on Middleton Bank and then started building up the speed for our long run toward the cafe.

Into the final few mile and I attacked on the rollers, just to surprise everyone, figuring they certainly wouldn’t be expecting the move. I then dragged a quite remarkably unstartled, unmoved and unflustered group, who were firmly lodged on my back wheel, up and around the final corner, before swinging aside for the sprinters to burn past.

Although earlier arrivals had all chose to sit inside the cafe, it was so hot and sticky we decide to sit outside in the garden. Zardoz had heard rumblings about a new, alternative jersey.

“We can all have your name on it,” I assured him.

I heard from G-Dawg and Crazy Legs that The Silence had been one of those attending the Ride leaders programme, where, by all accounts he’d remained characteristically tight-lipped and taciturn throughout. I’m not wholly convinced keeping mum is great attribute for a ride leader.

We also learned that he has a near fatal attraction for edging toward the kerb, particularly alarming for anyone caught on his inside. He’d make a deadly sprinter in a bunch finish.

Our brief sojourn in the garden was otherwise uneventful and we left in two or three disparate groups to make our way home. By great good fortune we saw no actual rain, but would periodically encounter soaking wet roads, suggesting we’d only just missed being caught in a fearsome shower or two.

This good fortune held all the way home, completing an unexpectedly dry club run and it wasn’t until I parked up the bike and stepped into the house that the heavens opened up and the rain came stottin’ down.

For once, good timing.