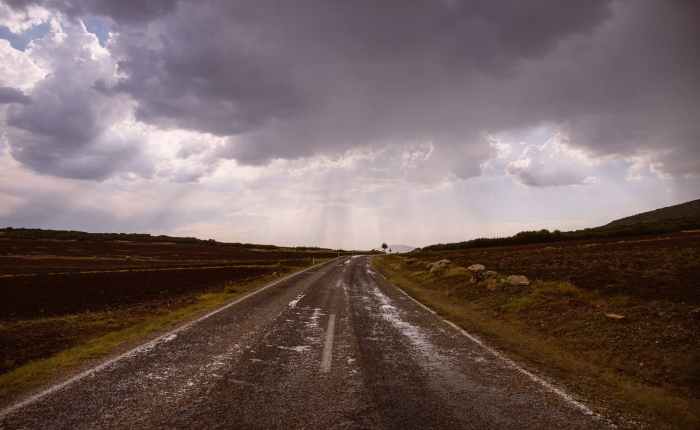 A year that’s already been grim and dark and difficult took an even blacker turn last weekend when my Dad died. Dad, Grandad, husband, brother, son, uncle, rugby player, ballroom dancer, draughtsman, engineering designer … all that and much more.

His death leaves an unfillable void, his life an indelible mark.

These sad circumstances kept me off the bike just when I could have done with the therapeutic, head-clearing relief of a long ride, so I was particularly determined to get out this weekend.

The weather was an issue with a rainy midweek only starting to clear as the weekend approached, but Saturday, the forecasts assured everyone, with a sly wink and a smile would be ok. Only an 11% chance of short, swiftly passing showers the BBC weather app proclaimed. Reasonable odds. I’ll take those.

Except Friday night was unexpectedly wet and there was plenty of surface water still around when I woke on Saturday morning. I decided I needed mudguards, but with Peugeot temporarily hors de combat, laid up with a seized rear-derailleur, I was left with a (Hobson’s) choice of my commuting single-speed, or a wet backside.

I’m not sure I’d enjoy a normal club ride on the mongrel single-speed, which is suitably tatty, odd-looking and mismatched enough that it can be left safely, chained up on campus in the full knowledge it will attract absolutely no interest whatsoever from even the most desperate of blind bicycle thieves.

Mechanically it’s sound and its simplicity makes it a joy to ride, but its designed to give me a fighting chance of making it up the big hills at either end of my commute. This means it’s got a 34 x 14 gear ratio, so my legs spin out at about 23 mph – which would be pretty hopeless for any mad dash to the café. As I’d be riding solo, however and maintaining strict social-distancing at all times, I decided I could get away with it, as long as I found a route with no particularly steep, sharp climbs.

As an afterthought, just before I set off I crammed a light jacket in my back pocket, just in case, against all odds, I did actually encounter some rain on my travels.

It was a stop-start sort of beginning, rolling down the Heinous Hill I found I couldn’t clip in and had to stop to dislodge a sliver of dried mud from under my cleat. I still can’t work out how it got there.

Then, once over the river, I glanced down at my Garmin and found I’d already covered over 70 kilometres! Oops, looked like some idiot forgot to reset their bike computer. I stopped to correct my lapse, then pushed on, climbing out of the valley to route through Denton Burn, Kingston Park and out into the countryside.

At that point a third stop was called for as a dank, cold, rain started sifting down until the air was sodden and everything, which most definitely included me, was quickly soaked through. And that’s how it stayed for the rest of the morning, wet and chilly, with my afterthought jacket providing some relief, until it too became water-logged.

Still, the climb up Berwick Hill was about the perfect steepness for me, taken at a brisk pace that soon had me warmed up. I routed through Kirkley, past the café and out toward the Gubeon. Just past the café I passed two cyclists going the other way and it wasn’t until I was level that I realised it was Taffy Steve and Sneaky Pete. Sneaky Pete would later apologise for not acknowledging me, being cold, wet and huddled within his own private bubble of misery. I told him he should just use my favourite excuse, that he’d been travelling at such speed he’d never had a chance to recognise who he passed.

A few miles further up the road, a group of about half a dozen riders, dragged themselves past, clustered together and obviously feeling no need for social distancing. I don’t agree, but it’s their call. An even bigger breach of etiquette in my books was the complete lack of mudguards on what seemed to be their very best, shiny plastic bikes and they kicked up rooster tails of dirty spray behind them as they ground by.

As the road started to develop a few testing bumps and lumps, I made an effort to catch and overtake them, just nudging ahead before having to take evasive action to avoid another cyclist who’d lurched into the road having seemingly emerged out of the hedgerow.

“Oh, hello,” said the erratic cyclist, as I scurried past. I immediately recognising the Prof under all his layers of protective wear.

“Bonjour Monsieur,” I greeted him.

“You’re not who I was expecting to see,” the Prof exclaimed, then, “Ah, there they are!” Apparently I’d just been overtaken, and then overtaken in turn, a gaggle of Backstreet Boys (and at least one Backstreet Gal.) They all reformed behind me, but luckily were going right at the next junction, while I was heading left.

I pressed on through Whalton, passing the Colossus who, somewhat disappointingly (but understandably) was not on on his Time-Trial bike today. Routing through Belsay, I took the lane to Ogle, passing a couple of tractors hacking back the hedges on either side of the road and yet again escaping without finding an errant thorn embedded in my tyre. This luck can’t last.

I pulled into the café at Kirkley chilled and soaked through, but generally in good spirits, wandering into the barn just as the Backstreet Boys exited, to find G-Dawg and the Colossus huddled around one of the tables they’d set up inside.

It wasn’t going to be the cosiest of café stops, but it was dry, out of the wind and, if G-Dawg was to be believed noticeably warmer than standing outside in the rain. I’m not wholly convinced, but it was shelter of a kind.

I complained bitterly that the forecast had predicted only the smallest chance of brief, passing showers and demanded to know where this prolonged, incessant downpour had sprung from. No one could help me.

One benefit of bad weather was the lack of a queue and I was quickly served and on my way back to the barn when a flatus-powered (by his own admission) Crazy Legs arrived to join us.

G-Dawg bemoaned the on-going Covid restrictions and the 3-tier system recently introduced by a Government seemingly flailing to find something that might just about work and more concerned with finding a catchy (i.e. banal) slogan in lieu of a way of reducing infections. As evidence I give you the nonsensical “Stay Alert” a wannabe-nursery rhyme “Hands, Face, Space” and the Arthur Conan Doyle “Rule of Six.”

The latest is a 3-tier, truncated DefCon scale, which saw Front Wheel Neil beating all the tabloid press to the punch, when he announced that he’d told us it would all end in tiers, almost as soon as the initiative was launched.

We quickly summarised the three tiers as:

Tier#3 – you’re up shit creek without a paddle, your boat is taking in water and there’s a tsunami brewing on the horizon.

G-Dawg was particularly perplexed that the guidelines for moving between tiers were unknown and totally depressed by the thought that there was no safe tier – Tier#0 for example, where life was normal. Surely, we surmised, there must be a small village in the Cotswolds, or a remote island off the coast of Scotland, that was safe enough to be free of any restrictions?

As we discussed such weighty matters, Buster emerged from the gloom outside, cold, wet and complaining about the weather forecast and how he’d been duped into believing the chance for rain was miniscule.

He’d been so taken in that he’d ventured out on his brand new “good bike” – a Cervelo he’d earmarked for only riding in perfect conditions. Maybe this also explains the Backstreet Boys lack of mudguards and perhaps they’re deserving the benefit of doubt?

When Busters food order hadn’t arrived tout de suite, Crazy Legs persuaded him to go check on it, suggesting the café had an unfortunate habit of misplacing orders, especially, rather bizarrely, when it wasn’t too busy.

“Don’t worry though,” he assured Buster as he got up, “If they have forgotten, they tend to slip a fried egg on top as compensation.”

“Hmm, I’m not sure I’d like a fried egg plonked on top of my Victoria sponge,” I offered.

We decided this probably would be an unwelcome gift on Victoria sponge, but perhaps a worthy addition to a fruit scone, as long as, Crazy Legs determined, it was an especially runny egg. Who knows, one day we might even try it.

The rest of the conversation was taken up with discussing the current state of professional cycling. The Giro, was seen as high entertainment, but with a bizarre list of contenders. “You know things aren’t normal when Pozzovivo is up there challenging for the lead, ” Crazy Legs asserted, although pleased as punch for one of his favourite riders.

The bizarreness of the Giro was in direct contrast to an absolutely enthralling Classics seasons, with Alaphillipe, van der Poel, van Aert and assorted others providing spills and thrills in equal measure and the faintest glimmer of normality.

By the time we were ready to leave the rain had passed, it was warming up and dangerously close to pleasant. I was almost dry by the time I made it to the bottom of the Heinous Hill, the bike had served me well and I won’t hesitate to use it again for longer rides, but I must admit there are times when an additional gear or two wouldn’t go amiss and this was one of them.