Easter Monday found me back on the road again, a luxurious fifteen minutes later than usual because of a 9.30 start, yet still finding all the roads pleasantly traffic free.

As expected, the temperature had dropped a couple of degrees overnight and I’d planned accordingly by choosing a thicker base layer, winter socks and full length tights. As a novelty, I seemed to get the layers just about right for a change.

The sky was still, clear and blue as I set off out into the best part of the day. Overhead grey cloud would slowly build up throughout the ride, but the rain had the good grace to hold off until much later in the afternoon, when even I’d made it home.

As I crossed the bridge it looked like the rowing club were enjoying a late start too, the doors to their boathouse only just opening and releasing a trail of rowers carrying their upside down hulls down to the river, like a long line of leaf-cutter ants hauling off their collective booty.

I was perhaps a little too relaxed on the way across and had to increase the pace as time slipped quickly by. I pushed a bit harder than usual on the gradual drop down to the meeting point and made it with 5 minutes to spare. I needn’t have worried though, as only the Red Max and Monkey Butler Boy were there before me.

Main topics of conversation at the start:

I explained to the Red Max that despite resting all Sunday, I felt tired to the core after two club runs already and a full week of commutes on the single-speed. I thought it would be interesting to see how this old codger coped with another long ride and what state I might be in by the time I got home.

The Monkey Butler Boy and Red Max then had a heated 5-minute discussion about the difference between a rubber band and an elastic band, with Max stopping half way through to reassure me that this type of disagreement was pretty much a daily occurrence in their household.

Others arrived, including Crazy Legs and OGL, who had both been out on Sunday, when the return home had become a bit of a trial of strength through a sudden burst of freezing rain.

They also reported a FNG “with the world’s dirtiest bike” had joined up and everyone had been ultra-cautious around him as not only had he ridden in a group before, but his entire frame visibly flexed when he was pedalling.

Only 5 minutes late, off we trundled and I took to the front with OGL for some world-class, all-round grumbling from both the old feller and his bike, which seemingly picking up the demeanour of its rider, was suffering from a bad case of mudguard rub.

A number of our crew had taken the opportunity to ride the Mod Rocker Sportif over the weekend which went over the (typically closed to the public) Otterburn Army ranges and featured (according to the blurb, which was put together without the slightest trace of hyperbole) “Northumberland’s only Alpine style passes.”

This prompted an OGL tale about a group riding up there and ignoring the red flags, only to be intercepted by an apoplectic, foul-mouthed Sergeant-Major, who didn’t seem at all welcoming, or pleased to see them.

The riders finally deciphered his actual message, buried under an avalanche of creative swear-words – the gist of which was that the series of steel sheets, set up about 50 yards from the road, were the target for a currently in-bound flight of ground-attack Harriers carrying live ordnance. With communications finally established, he very politely suggested they haul ass out of there as fast as they could pedal.

Tall-tales told, OGL slipped off the front and I kept going for a while with Caracol for company, before pulling over and letting others set the pace.

I dropped in beside Aether and commented that I thought his bottle looked like it was filled with Muc-Off bike cleaner. I learned that it was actually his own patented, home-made energy drink, made from very weak Ribena with a pinch of sugar and salt – the exact quantities of which are a closely guarded secret, like the Coca-Cola recipe.

He said the Prof had tried some and been very, very impressed.

“Woah, it must be good.” I suggested.

“Oh, I don’t think he cared what it tasted like, or worried if it was effective – I just think he liked the idea of how much money he could save by making his own!”

Shortly after we split the group, OGL taking a few on the direct route through Whalton and on to the café, while a half a dozen or so of us took a wider loop that took in Molesden, Meldon and then Bolam. 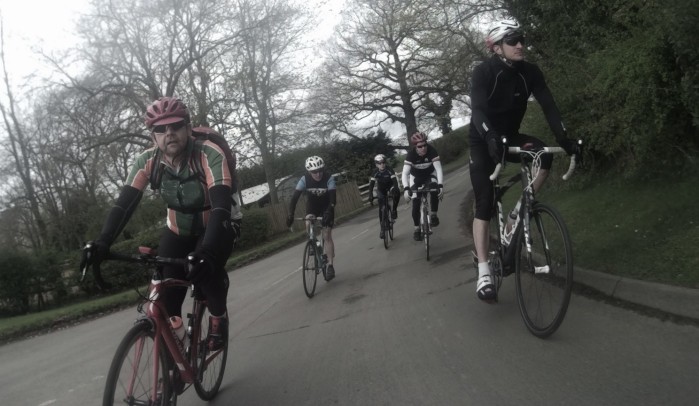 At this last point it was pin your ears bike time, as the pace started to increase. Sitting at the back as we rattled through Milestone Woods I sensed Spry gathering to attack up the rollers and cautiously followed as he surged forward.

For a brief, glorious time I matched his pace as we opened up a small gap and I even seemed to close on him as the gradient on the first ramp stiffened. But then, that ephemeral nano-second passed and I watched him slip away.

On the downslope I was freewheeling and trying to recover, while everyone else was driving on and I slipped to the back again and then watched a small gap eke out until we hit the bottom of the descent. I then started up the last slopes, closing in on the Red Max and Crazy Legs as we rolled to the café.

Everyone seemed to enjoy my retelling of “the Incident of the Puncture from Hell” following last week’s ride (Wall to Wall Sunshine.) They were obviously not there otherwise, like me, they’d still bear the scars and find it much too painful to talk about.

Andeven simply wondered why we hadn’t ridden away and I told him we had jokingly threatened to leave the Garrulous Kid stranded, but he’d promised he’d just be waiting for us to return the following week and make us stop to help him then. It was at this point that Crazy Legs started wondering aloud what other routes we could take home to bypass this very spot –  just in case.

Crazy Legs reported that he’d been asked to help an acquaintance find a new bike within a £2,000 budget – a velophile’s dream, giving him countless hours of guilt-free browsing of bike websites without having to actually spend any money.

Having already established we were talking about a road bike, the obvious questions Crazy Legs had come up with to help narrow the search down were:

“What would you prefer, stylish Italian, dull and soulless Japanese, or a nasty American groupset with a stupid name nobody knows how to pronounce?”

“So, which of these Bianchi’s do you like best?”

I suggested that you should always start with a bikes colour (yes, I am that shallow) and Crazy Legs agreed to amend his questions to include, “Which colour celeste do you prefer, the original, with its rich heritage and association with classic cycling, or this cheap and tacky Trek rip-off?”

Do not read if you’re a fan of Homeland and haven’t seen the season finale.

The café was so busy we were sitting with a civilian at our table and a discussion about TV shows, good and bad, led to him asking what we thought of the latest Homeland. I think everyone who watched agreed it was the best series since the original, but I suggested they’d lost their greatest character by killing off Peter Quinn.

“What!!! They’ve killed off Quinn? Great, thanks.” Crazy Legs spluttered.

He then confessed he’d tried the new series, but had lost interest and given up, so instead of spoiling the ending for him, maybe I just saved him watching after all?

That’s my excuse anyway and I’m sticking to it.

We’d picked up a host of late arrivals by the time we left the café, including a bunch of Grogs nursing some apparently serious hangovers. Once again, I took up position on the front with OGL as we reached the quieter lanes and regrouped.

The Hammer zipped past, going full bore and apologising that he had an urgent appointments and needed to be elsewhere. OGL said in the past they would have let him get 200 or 300 yards up the road and then organised a through-and-off until they’d dragged the lone rider back. Then they’d have just sat camped on his rear wheel all the way home.

OGL lost contact as we climbed up Berwick Hill and was replaced by the Red Max. A bit further on and he pointed to a spot where a few weeks ago he’d been stopped, helping fix a puncture, when the Monkey Butler Boy had cruised past with his new club training partners.

Max had tried flagging them down, but to no avail and as they had ridden away he’d ran down the road after them screaming, “Come back here, you little shit!” – to the evident delight of the Monkey Butler Boy – who’d barely been able to ride home he’d been giggling so much.

Then the group were turning off and I let Caracol drag me through the Mad Mile before we split at the roundabout and I swung away for home.

The roads were still clear of traffic and relatively quiet. I made good time back, not feeling particularly tired when spinning along at a normal pace, but noticing the lactic acid was much quicker to build up and burn if I pressed the pace too much, or attacked any of hills hard. I was still feeling pretty good though, even as I crested the Heinous Hill – maybe next year I’ll try riding all four days.

That was a great and grand weekend anyway: 3 club runs in 4 days, covering 274kms, with 2,250 metres of climbing, riding with perhaps 40 different people, netting 36 Strava achievements including 27 PR’s, consuming 6 cups of coffee, 2 lemon almond slices, a seasonal, hot-cross scone (I kid you not), collating a hatful of decent (by my standard) photos and disgorging an effluvia of 4,500 or so random words in my usual … err … inimitable style.

I enjoyed myself and the efforts didn’t quite slay the codger. I’ll even ride into work on Tuesday, although I’ll definitely give the clubs inaugural chain-gang a miss on Tuesday night, I do feel I need to rest up and recover just a little bit before next weekend.