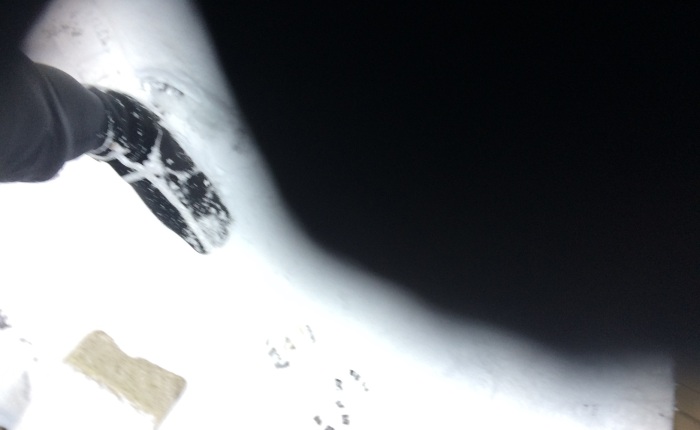 It’s fair to say that, for once the “Beast from the East” actually lived up the hype and was extremely disruptive, with freezing temperatures and heavy snowfall from the Tuesday night, right through to Sunday evening.

[NB: just because doom-laden prophecies about dire weather from the Daily Heil, Daily Suppressed and their ilk were actually correct for once, doesn’t lend them any credibility, or excuse the 1,001 prior occasions when they’ve tried to whip up utter hysteria and shameful scaremongering on any number of topics. These publications remain utter trash.]

The resolute, club stalwarts still turned up for the Saturday club run, with everyone taking to mountain-bikes and going on an off-road for a grand adventure, though sadly without me. I figured a 25 mile or so schlep, by mountain bike, on dodgy roads, just to get me to the meeting point and back again, was probably a little too ambitious. So I stayed home and got some alternative exercise digging Mrs. SLJ’s car out of its snowdrift.

(My own car still remains entombed in its chilling cocoon of snow and ice and it’s being left to thaw out naturally. I’m in no rush.)

G-Dawg described the Saturday club run as the most fun he’s had on a bike in ages and I can understand why – I still managed my usual Wednesday-Thursday-Friday commute en vélo through the worst of the weather and, rather perversely, thoroughly enjoyed myself.

Some lessons learned and random observations:

The road conditions seemed to improve with every ride, so first thing Wednesday morning saw the worst conditions (and most fun) but by Friday evening my journey had became a fairly standard, if cold commute, with only one or two sketchy, skatey stretches.

I wore an old pair of overshoes on top of my winter boots, expecting to be passed by lots of cars dumping ice-cold slush onto my feet. As it was on Wednesday morning I was travelling at least as fast as most of the sparse traffic on the roads and only recall two cars actually overtaking me. My feet never felt cold enough to benefit from the additional layer and the snow wasn’t wet enough to “slush me up” – so I’m still not sure how effective my extreme measures would have been.

The conditions on Wednesday encouraged me not to clip in, so I could quickly dab my feet down in an emergency. The Wellgo flat pedals on my mountain bike, with an SPD clip on one side proved very handy for this.

When I did decide I could risk clipping in, I then found either the pedals or my shoes encased in solid blocks of ice and it proved impossible.

Although perhaps safer, I remembered how much I HATE riding and not being clipped-in. By the time I was heading home on Wednesday I was only unclipping when I hit one or two difficult stretches.

I should have worn a cap. I arrived at work on Wednesday morning with a solid block of ice wedged firmly between my helmet and specs … and a ferociously chilled forehead. Likewise, I had icy-cornrows in my hair caused by the accumulation of snow in my helmet vents.

The few people who actually made it into work were amazed I cycled in and opinion was split between those who thought I was certifiably mad and those who thought I was some kind of dare-devil. In reality, apart from it being hugely enjoyable, I actually felt safer than I would have been in a car, more in control, more aware of my surroundings and with more options if I wanted to bale and walk. I think travelling by car would have been much more difficult and uncertain.

Cycling on pristine, white and unblemished snow is fine. Cycling on heavily churned up, grey, dirty and heavily trafficked snow is fine. Somewhere between the two, when the snow varies between slick, heavy and compacted and just a little cut up, is like riding through sand. It takes a bit of concentration, involves a lot of sliding, wheel spinning and fishtailing and is hard work. I soon came to especially dislike this faintly beige snow.

Unanticipated traffic speed bumps hiding under deep snow can take you by surprise and come as a bit of a shock!

When people abandon their cars in the snow, they do so in the dumbest of places; on a blind corner of a long downhill, at the entrance to a busy junction, facing the wrong way on a one-way street and occasionally, slap bang in the middle of the road.

I don’t know what the cycle track over the Millennium Bridge is surfaced with and I expected the worst, but it was always snow and ice free and grippy. I found myself sharing it with more than the usual number of walkers who’d abandoned the slippery, snowbound pedestrian side.

Anyway, enough rambling … so long the Beast from the East, it was fun while it lasted and you had the good grace not to hang around too long. Hopefully things will have returned back to normal in time for next Saturday’s club run. We’ll see.